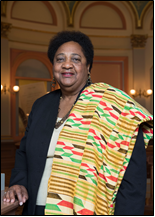 Weber was born to sharecroppers in Hope, Arkansas during the segregationist Jim Crow era. Her father, who left Arkansas after being threatened by a lynch mob, did not have the opportunity to vote until he was in his 30s. Her grandfather never voted as custom and law in the South, before the Voting Rights Act of 1965, systemically suppressed voting by Blacks. Although her family moved to California when Weber was three years old, it was her family’s experience in the Jim Crow South that has driven her activism and legislative work. She has fought to secure and expand civil rights for all Californians, including restoring voting rights for individuals who have completed their prison term.

Secretary Weber is a mother of two adult children, three grandchildren and was married for 29 years to the late Honorable Daniel Weber.  She is number six in a family of eight children. Her Parents, David and Mildred Nash, are deceased. Her hobbies are reading and traveling.

Register in advance for this meeting: Click here to register for zoom meeting

After registering, you will receive a confirmation email containing information about joining the meeting.

Come join the discussion. All are invited.