TOPIC: Review the Propositions on the November 3, 2020, Ballot

ZOOM ID: Will be announced

ZOOM LINK: Will be announced 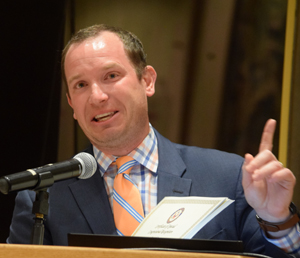 Jason Bercovitch graduated from the University of California, Riverside with a Bachelor of Arts in Business Economics and a minor in Political Science. In 2010, Jason began his political career as an intern for Congresswoman Susan Davis. Jason now works as a Field Representative for Congressman Scott Peters, where he has been since March of 2013, specializing in immigration, foreign affairs, and financial services.  Jason is fluent in Spanish which has given him a unique ability to connect on a personal level with the growing community of Latino refugees coming to the United States.  Jason was elected to the San Diego County Democratic Party Central Committee in 2016, where he served as the Executive Board as the North Area Vice-Chair.

Jason will review in detail in an interesting and entertaining way the propositions on the November 3, 2020 ballot. This, in the past, has been a very popular topic given by a knowledgeable speaker. There are some very important proposition issues on this ballot -- police review board, affirmative action, voter rights, rent control, property taxes, worker rights and etc. Come join the discussion. Have your ballot handy.